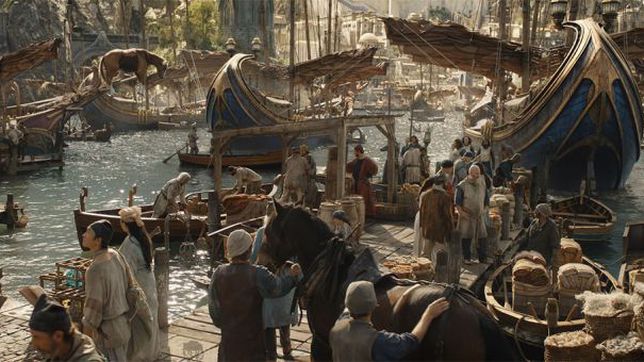 How long before Lord of the Rings does the Rings of Power take place?

For the very first time The Lord of the Rings: The Rings of Power brings the legendary Second Age of Middle-earth to life. The epic drama series was released on Prime Video earlier this month and new episodes are released every week.

Essentially a distant prequel to the much-loved film trilogy, The Rings of Power is based on the writings of JRR Tolkien and the lore that predates the events of The Lord of the Rings.

So where does Tolkien’s World’s Last Offering fit in the timeline? The original trilogy begins in the year 3018 TA (third age) and we know from these depictions that the physical power rings were made between 1500 and 1600 SA (second age).

The Second Age lasted 3,441 years, so we can deduce that the new TV show is set at least 4,959 years before the events of Lord of the Rings.

After the end of Morgoth’s reign, the Second Age begins with a period of relative peace. However, the prosperity Middle-earth enjoys is soon disrupted by the return of a dark presence to the realm.

What will Rings of Power offer hardcore Lord of the Rings fans?

In creating the long-awaited series, director JA Bayona had to combine the need to take the story in a new direction, while staying true to the principles and cinematography that drew audiences to Middle-earth in the first place.

having directed The impossible and Jurassic World: Fallen KingdomBayona knows how to create a fantastic but natural environment for the story to unfold. He opted to use only natural light wherever possible, giving the show an earthy and distinctly un-Hollywood feel.

In an interview with Collider, Bayona explained that her making was born out of a desire to reintroduce audiences to The Lord of the Rings:

“I will be very excited if people are so excited about Middle-earth again. Because being such a delight of Tolkien’s books, I think all the values ​​you can find in those books are so needed these days.

Photograph by Oscar Faura
Directed by JA Bayona
Production design by Ramsey Avery and Rick Heinrichs
From the episode “A Shadow of the Past” pic.twitter.com/v6FvBZHth0

The visual depiction of Middle-earth, for a period of five millennia before other cinematic depictions, offered both an opportunity and a challenge to the director. Bayona turned, predictably, to the original text for guidance.

“From the moment you choose the director of photography, you define the style of the show. So basically, he would go back to the books and try to figure them out and how they would translate visually.