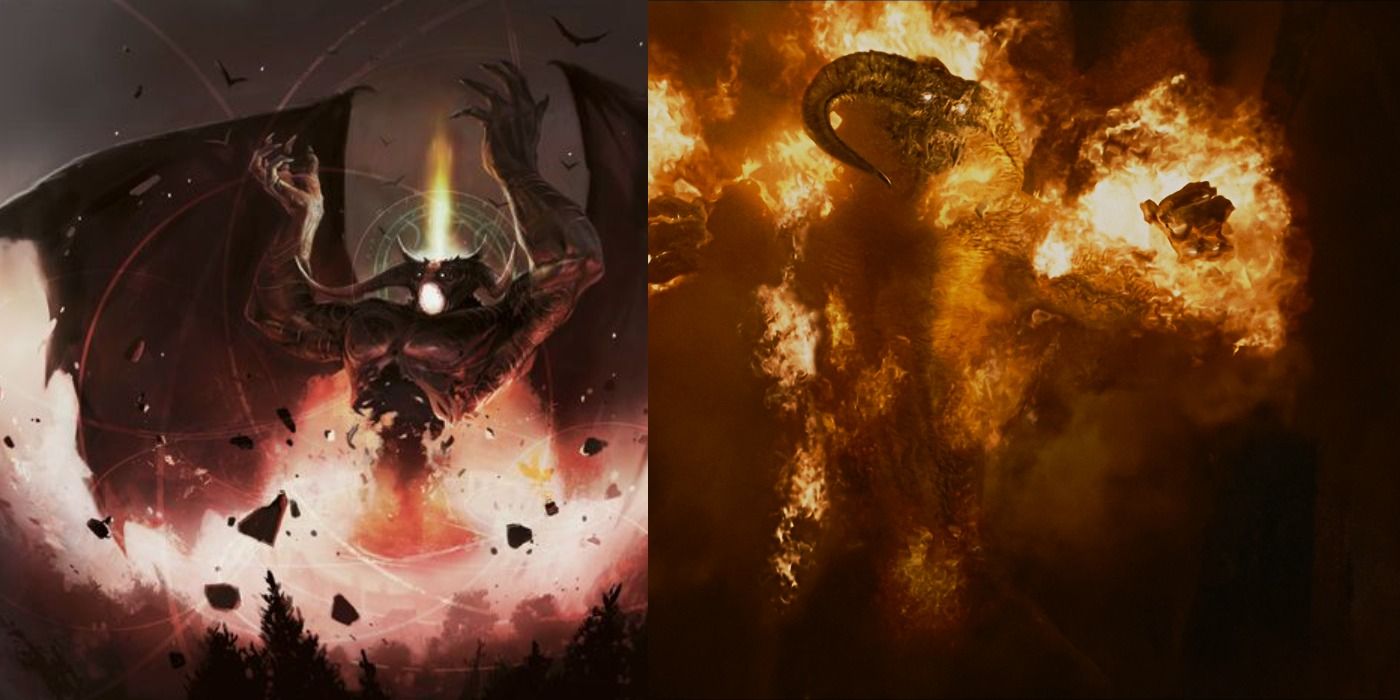 How The Lord of the Rings Balrog Inspired Yu-Gi-Oh! & MTG Cards

The Balrog is one of the most memorable monsters in The Lord of the Rings and has inspired creatures in Magic: The Gathering and Yu-Gi-Oh!.

The Balrog of The Lord of the Rings creatures directly inspired in Magic: The Gathering and Yu Gi Oh!, even though they couldn’t use the original name. The term Balrog refers to an entire evil race in Middle-earth history, though most people use the name to refer to the creature Gandalf is fighting as. LOTR‘s Mines of Moria at the Fellowship of the Ring. This creature is known as Durin’s Bane, but people call it the Balrog because it’s the only one of its kind to appear in The Lord of the Rings trilogy.

The Balrog only has a brief appearance in the Fellowship of the Ring, but it left a huge mark on the franchise. Gandalf is separated from the other Fellowship members by the Balrog, and he eventually dies after slaying the beast but is reborn as Gandalf the White. Outside of its narrative relevance, the Balrog is just an awesome villain. Sauron is the main antagonist of The Lord of the Ringss books and movies, but he never makes a physical appearance, and only Pippin receives a brief glimpse of his shattered form in the Palantir. By comparison, the Balrog is the living embodiment of darkness and fire, who could have easily killed the Fellowship if Gandalf hadn’t sacrificed himself and sent him crashing under the bridge of Khazad-dûm. The creature even has some cool weaponry, as it faces the Fellowship with a massive searing sword and a whip which it uses to drag Gandalf to its fate.

Related: D&D’s Weakest Monster Is Coming To Magic: The Gathering

There have been several the Lord of the Rings card games, video games and tabletop RPGs released over the years, with the one ring rpg The 2nd edition being one of the most recent. The Balrog’s iconic status means it has appeared as a boss in various the Lord of the Rings games over the years, but its most famous appearance was in Peter Jackson’s film trilogy, where it brought the thrilling battle in the Mines of Moria to an explosive climax. The Balrog has inspired many monsters over the years and served as the basis for iconic creatures in the world’s biggest collectible card games.

LOTR’s Balrog-Inspired Creatures in Other Media

The Balrog is one of the strongest enemies in The Lord of the Rings and certainly one of the most visually impressive. It’s no surprise that creators of tabletop RPGs and video games wanted to use the Balrog in some form, even if they didn’t have permission from the Tolkien Estate. games like Dungeons & Dragons and Akalabeth (the precursor of Ultimate series) both feature Balrogs at some point. J&D was stopped emulating LOTR with a legal action, which resulted in the modification of certain elements directly inspired by Tolkien’s work, the Balrog being transformed into Balor. The name may have changed, but it’s still obvious what inspired the Balor’s design, as it’s shown using the same weapons as the Balrog. the Ultimate The series changed the Balrog to Balron, with their artwork resembling most depictions of the creature. The Balor also appears in the Scout Tabletop RPG, due to its connections to J&D. Balrogs also exist throughout the Diablo series, where they are depicted as red-skinned winged demons.

Lord Of The Pit Is Magic: LOTR’s Gathering Version Of The Balrog

The Pit Lord was one of the most fearsome and powerful cards in the first Magic: The Gathering together. It costs seven mana to play the field and requires the player using it to sacrifice a creature at the start of its upkeep or take seven damage, but it has flying and trample, making it extremely difficult for an opponent given to avoid taking powerful hits from the creature. The artist for the first version of the Lord of the Pit map was Mark Tedin, who had a lot of leeway when designing the creature. Tedin mentioned during an interview with the Magic: The Gathering website than the only description given for this particular former Magic: The Gathering the card was “Balrog“. This means that the Lord of Pit was Tedin’s interpretation of the Balrog of The Lord of the Ringsthough he is not seen using the Balrog’s signature flaming sword or whip.

Yu Gi Oh! To the anime Lord Of The Pit (and the Gorlag)

Yu Gi Oh! is one of the most popular collectible card games in the world, but it started as a manga series created by Kazuki Takahashi. The Duel Monsters card game that served as the basis for the Yu Gi Oh! was originally created as a one-off game that copied elements from popular collectible card games of the time, and it was only due to rabid fan interest that it appeared in the next issues. Duel Monsters would take over Yu Gi Oh!the original manga story and would eventually become a real game, which is still going strong today.

It is clear that Takahashi was inspired by Magic: The Gathering for some of the card illustrations in the Yu Gi Oh! manga, because cards like Dark Energy have almost identical designs to Magic: The Gathering maps. One of the most obvious examples of this is Summoned Skull, which is one of Yugi Muto’s signature cards. Summoned Skull looks incredibly similar to Lord of the Pit, with the original manga card artwork using the same composition. This means Yu Gi Oh! has a Balrog-inspired monster by proxy, even though it’s from the Magic: The Gathering version of the Balrog.

the Yu Gi Oh! the anime had some weird exclusive cards that never appeared in the official game. The Japanese version of Yu Gi Oh! the anime actually had a card called Balrog, which was used by Alister during the Waking the Dragons filler arc. This creature looks even more like the Balrog, down to the burning sword. The creature’s name was changed to Gorlag in the English dub, likely to avoid prosecution. The episode where the Gorlag first appeared began in 2003, when The Lord of the Rings movies were still coming out and the creature had found new fans all over the world.

Scott has been writing for Screen Rant since 2016 and a regular contributor to The Gamer. He has previously written articles and video scripts for websites like Cracked, Dorkly, Topless Robot and TopTenz. A graduate of Edge Hill University in the UK, Scott started out as a film student before moving into journalism. It turns out that wasting a childhood playing video games, reading comics, and watching movies could be used to get a job, regardless of what any career counselor might tell you. Scott specializes in games and has loved the medium since the early 90s, when his first console was a ZX Spectrum that took 40 minutes to load a game from a cassette player to a black and white TV. Scott now writes game reviews for Screen Rant and The Gamer, as well as feature stories, opinion pieces, and game guides. He can be contacted on LinkedIn.

The winners were announced at the annual Trail of Tears art exhibition and sale, Cherokee Art Market Youth Competition | News