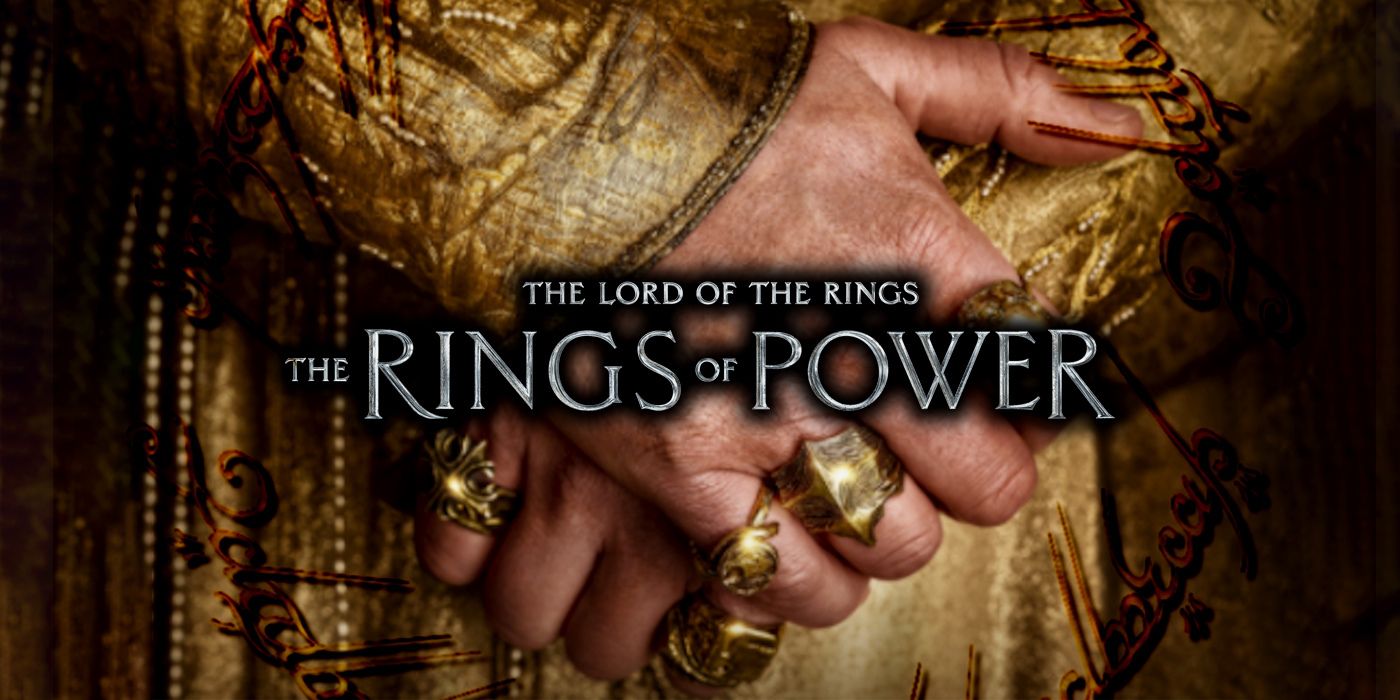 Amazon’s Next The Lord of the Rings: The Rings of Power TV series have become an art of playing with the hearts of fans. At first it was a “young Aragorn” series. Then it was revealed to be a Second Age series, set long before the Brotherhood era. Then, when the first official photo from the series was released, fans were again in awe, as the photo depicted the two trees of Valinor, which were only alive in the first age. The recent poster reveal was the icing on the cake. In a move clearly calculated to reveal a lot and simultaneously reveal nothing at all, Amazon dropped 23 character posters for the upcoming series – complete with a mountain of photos of glamorous hands and exactly zero faces.

Along with the long tricky game the upcoming TV series plays comes with a few easter eggs for keen eyes, as must have been precisely calculated by the evil geniuses behind the marketing campaign. They know that we will guess the characters belonging to these hands. They want us to guess. They ask us to guess.

There’s so much in the air for this upcoming series that what follows here is just my best guess based on an unholy amount of nerd knowledge I’ve accumulated over years of digging through books where my only friends were Frodo and Fingolfin. But it all comes in handy now!

RELATED: The Scenes From Tolkien’s Book We All Want To See On Screen

It’s difficult, because the poster here is an extremely flamboyant and shiny armored figure. In many ways, this figure is reminiscent of other posters: there are Celtic scrolls and what looks like a Trinity scroll on the breastplate, for one. However, there are still a few telltale clues that point to a more definitive identity here than the other images.

There is an extremely strong “sunburst” pattern, visible on the pommel of the sword and on the cuirass itself. More than anything else, the character this seems to indicate is Ar-Pharazon “the Golden”. The brilliant golden imagery throughout certainly seems to indicate this, combined with the golden sunburst pattern and the “divine” imagery of the Trinity scroll. It was Ar-Pharazon whose pursuit of immortality was an act of hubris that doomed Numenor, so he’s bound to be an important character in this series.

COLLIDER VIDEO OF THE DAY

This is one of the most curious cases, since the image seems to represent a woman with a white flower in her hands. She’s clearly kind of noble, given the ornate bracelets and armor, but that’s not definitive. She might be an invented character for the show, but the clothes she’s wearing in the poster are intriguing and, perhaps, revealing.

The scaled mail seen above seems to indicate a Numenorean character, but if the Numenorean identification is correct, in all likelihood the flower is one of the white flowers of Nimloth, the tree from which the White Tree of the Gondor was a descendant. Nimloth flourished in the courts of Numenor, but was eventually felled by Ar-Pharazon. The identification of this poster therefore points tantalizingly to Tar-Miriel, the wife of Ar-Pharazon, who was married to him against his will and clearly disagreed with him in many respects. Whether it was the tragic queen of Numenor who struggled with her husband’s pride would be a great plotline for the series to explore.

First, the obvious: the armor has a feminine shape, tapering at the waist and flaring out beyond it. The real key here, however, is the dagger. This is where my lack of college friends pays its dividends. The dagger is clearly an image of Telperion and Laurelin, the Trees of Gold and Silver. The dagger is half silver and half gold, with a tree root and flower theme progressing from hilt to blade.

The reason it means Galadriel is because Telperion and Laurelin were the trees of Valinor, which at one time were the light sources of the world. Each produced light and waxed and waned each day, while briefly mixing their silver and golden light during the day. Galadriel’s hair was said to be an image of the blending of these two lights and the reason why the elf Feanor created the Silmarils in the First Age. Additionally, there appears to be a “pearl” pattern on the blade of the dagger, which may be a reference to Galadriel’s mother, Earwen, who was a sea elf.

Plus, seeing Galadriel thrown into battle is something we’ve all been waiting to see anyway, right?

This must be a dwarf. From the heavy weapon to the broad hands to the red beard and gold dust on his hands, this must be one of the dwarves, almost certainly from Khazad-dum. Dwarves as central characters are to be expected, given that the Elvish kingdom of Eregion and the Dwarven kingdom of Khazad-dum were on particularly good terms for much of the Second Age, and it is in Eregion that the rings of power have been forged.

However, there is more here than initially appears. There are runes on the ax held by the dwarf, and according to Tolkien’s linguistic appendices, the inscription reads something like “sleeping stone awakened”. In Tolkien’s lore, this could be quite an important inscription. In dwarf legend, the first king of the dwarves was called “Durin the Immortal” and it was said that he would be reincarnated seven times. Whatever the status of the legend, Tolkien’s timelines indicate that Durin III or IV is important to the events of the Second Age, and it would be likely that King Durin, whether descended or reincarnated, is important to the events from the Serie. His “awakening from sleep” was referenced in the the Lord of the Rings books, as is the discovery of his ax as a legendary artifact, which this poster might represent.

To hazard a guess, this image looks like Elrond. The elegant posture and flowing robes would seem to indicate an elf, and what little parchment can be seen seems to show a sketch of what looks a lot like Rivendell from the Peter Jackson films.

That said, there is also a script at the bottom of this scroll, in Tolkien’s “Tengwar” alphabet. While some of the words are fuzzy and unclear, it appears to read “king’s scroll – southern view” at the bottom, further confusing. While it may well be Elrond and Rivendell, there is a “king’s scroll” in Tolkien’s legendarium, which is a list of the kings and queens of Numenor, written in the Quenya alphabet. A version of this list was kept in Gondor after the fall of Numenor, so perhaps Elrond could play a role in its preservation, but the scroll and its bearer are therefore extremely mysterious here.

There is only a very limited field of characters that this poster could represent. Again, this could be a made-up character, but the pendant on the garment would indicate a specific cast of characters. The star pendant is a design seen on at least one other poster, but it has an important story behind it. It is known as the star of Feanor, and is associated with it, as Gandalf references in the the Lord of the Rings delivered. Therefore this character is probably an elf, most likely from the realm of Eregion, as the star of Feanor was seen on the west gate of Khazad-dum due to the alliance between the dwarves and the elves of Eregion .

It could be Gil-galad, the High King of the Elves, or perhaps Elrond, who was at one time Gil-galad’s lieutenant. Another intriguing possibility is that it’s actually Celebrimbor, the Ringmaker himself. Although Feanor’s star could mean a number of things, it could possibly be a family symbol for Feanor himself. Celebrimbor, as Feanor’s grandson, could be the character depicted in the poster, and the saturation of the rings on his hands could be another clue to his identity.

The broken black sword with a rough and ugly rune on the blade is one of the most enticing and confusing posters of the lot. It appears to be an evil weapon crafted by an evil hand, so it wouldn’t be surprising to see it in the hands of Sauron or the Ringwraiths.

However, the man holding it does not appear to be regal or divine like Sauron; he looks more like a hunter or a traveler. Also, Tolkien said almost nothing about the weapons carried by Sauron or the Ringwraiths. As such, this could be a weapon created for the TV series storyline, but there is another (admittedly far-fetched) possibility.

There’s a famous broken black sword in Tolkien’s legendarium, but it’s in the wrong timeline for a Second Age series. It was the blade named Gurthang, wielded by the tragic Turambar of Turin, which broke when he fell upon it in despair, killing himself after realizing he had condemned himself and impregnated his own sister, who jumped from a waterfall. There are messed up stories in The Silmarillion. The timeline does not work for this character to be Turin, but there is a small possibility that power rings could play with a scenario where a character embarks on a quest to find the broken sword of Turin.

It appears to be some sort of symbolic staff rather than a weapon, and that in itself opens up some interesting possibilities. Given the Numenorian orientation of the series, there are actually of them famous rods of authority in Numenor as it could potentially be: the Scepter of Numenor or the Scepter of Annuminas.

As one of the other posters is likely to be Ar-Pharazon, it’s tempting to think it’s the Scepter of Annuminas, which itself might give a clue to the identity of the wielder. The last of the lords of Andunia was Amandil, who rejected the disastrous plans of Ar-Pharazon and provided an escape for his son Elendil, the father of Isildur and Anarion. If it’s the Scepter of Annuminas, it’s almost certainly wielded by someone from Amandil’s family.

The last possibility is another odd one. The city at the end of the scepter looks suspiciously like the city of Gondolin in one of the paintings made by Tolkien’s illustrator Alan Leewho was one of the designers of the first Jackson the Lord of the Rings movies. It’s very unlikely, since Gondolin only ever existed in the First Age, but it’s not impossible. If anything is certain with these new posters, it’s that they’re meant to be guessing and guessing about the show’s subject matter and timeline. For now, we’ll have to wait and see, but the Easter Eggs have certainly created the kind of commotion they were meant to do.

“The Lord of the Rings”: The Rings of Power, Explained

One ring to rule them all…

I’m Patrick Lyon and I write for Collider. I also teach Latin and literature at secondary level and have always been a fan of Tolkien’s works.