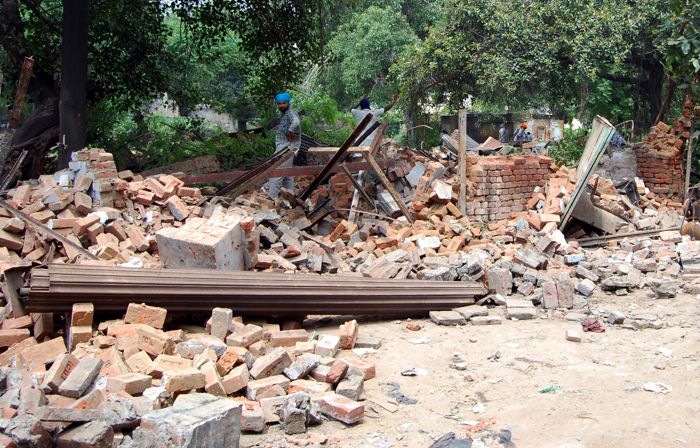 ‘Shall be’ coming, SGPC razes shops near Golden Temple in Amritsar – Reuters

The Shiromani Gurdwara Parbandhak Committee (SGPC) today demolished shops at Akali market near the Golden Temple to clear the way for a ‘serai’ (inn) – a move that has drawn anger from traders who claim that the SGPC made a “serious error”. because they claim that it was the fourth Sikh master Guru Ram Das who established the trading community in Amritsar.

The seven-acre Akali Market is located near Gheo Mandi behind Akal Takht and is owned by the SGPC. This land was leased to merchants who had been practicing their trade for 80 years.

The foundation stone for a 1,400-room multi-storey “serai” was laid in October 2021, when Bibi Jagir Kaur was the chairman of the SGPC.

About fifty shops were an obstacle to the construction of the “serai”.

The traders said the SGPC asked them to leave the land and gave them a “verbal assurance” to rehabilitate them at another location.

Ravinder Lal Singh, president of the Burj Akali Market Shop Association, claimed that the SGPC had neither served an eviction notice nor given enough time to move their belongings.

“More than 100 SGPC task force members with bulldozers came into the market today and demolished 15 stores,” he said, adding that the demolition campaign was halted after the intervention of a local SAD leader.

“Guru Ram Das had set up the trading community in Amritsar, but SGPC did the opposite. It uprooted us,” added Ravinder Lal.

Traders claimed to have suffered losses in the thousands of rupees. Sources say some of the traders had a dispute with the SGPC over rent.

Sanjeev Kumar, whose 60-year-old steel almirahs store was among the structures razed today, said: “My father had signed a contract with the SGPC to start a business in Akali market. There was a dispute over the rent. We had withdrawn the case on the assurance of the SGPC that the case would be settled out of court, but that was not the case. Today, my shop was reduced to rubble in an hour. It was my only source of income.

Golden Temple Director Sulakhan Singh said: “The SGPC is obligated to rehabilitate ‘genuine’ tenants or their next generation with whom it has entered into a tenancy agreement. A meeting is scheduled for tomorrow to resolve the issue.

The SGPC did not serve an eviction notice or give enough time to move our belongings. Guru Ram Das had set up the business community in Amritsar, but the SGPC uprooted us. — Ravinder Singh, Chief, Burj Akali Market Assn

The SGPC is required to rehabilitate the “true” tenants or their successors, with whom it has entered into a lease. A meeting is scheduled for today. — Sulakhan Singh, Director, Golden Temple